When I first read the blurb for MINOTAUR, I knew I had to read it, and I’m so glad I got an ARC from Month9Books. This story did not disappoint.

I do have to say it took me a bit to get into the story. The writing style is unique and a little ‘slower’  than I’m used to. I felt as if I were taking a leisurely stroll with Ovid, the scholar. And then this incident happens and we meet Asterion, aka Minotaur, who leads Ovid to the mountain and the labyrinth of Minotaur legend.

This story is so compelling, so heartbreaking, so different than anything you’ve ever read about the Minotaur.  It is billed as the true story of the Minotaur, and I’m inclined to believe it. Asterion opens his heart, his soul as he tells Ovid about his trials and tribulations of growing up, about being made fun of and ridiculed. About being shunned and despised by his father because he was the son of a god.  We learn of the love of his life and experience his heartache as he retells the moment when she was stolen from him. But the twist I wasn’t ready for was what really happened to him in the labyrinth.

For those familiar with the Minotaur stories, the creature suffers a horrible, bloody, gory end at the hands of Theseus, the god-founder of Athens.  This true story tells a different tale, one that will change everything you’ve ever learned or believed.  I was mesmerized, spellbound, and my emotions were all over the place as I read this story.

This is not your typical Greek mythology story-telling type book. If you’re looking for something like Percy Jackson retelling of Greek mythology, you’re not going to get it here. This is deep, dark and very solid, strong writing, and I’m happy to say I can give a two thumbs up review of this ARC from Month9Books.  This won’t be a book for everyone, but if you like good fantasy that takes its time to unfold, then you’re going to love Minotaur.

Do you want to read what others are saying about this amazing book?  Follow the Review Tour Schedule HERE

“Where shall I start?” asked Minotaur.

Ovid made an expansive gesture with both hands. “Where else but the beginning of course.”

Minotaur nodded his huge head. “Yes,” he said. “Yes,” his eyes already glazing over with the weight of thousand-year-old memories. And then he began.

So begins the story of Asterion, later known as Minotaur, the supposed half bull creature of Greek legend. Recorded by the famous Roman poet, Ovid, Asterion tells of his boyhood in Crete under the cruel hand of his stepfather Minos, his adventures with his friend, Theseus, and his growing love for the beautiful Phaedra.And of course what really happened in the labyrinth.

This is the true story of the Minotaur. 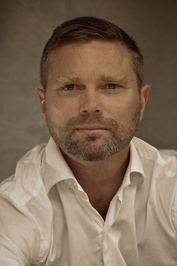 Phillip W. Simpson is the author of many novels, chapter books and other stories for children. His publishers include Macmillan, Penguin, Pearson, Cengage, Raintree and Oxford University Press.

He received both his undergraduate degree in Ancient History and Archaeology and his Masters (Hons) degree in Archaeology from the University of Auckland.

Before embarking on his writing career, he joined the army as an officer cadet, owned a comic shop and worked in recruitment in both the UK and Australia.

He is represented by Vicki Marsdon at Wordlink literary agency.

When not writing, he works as a school teacher.