After all the hard work…after all the hours staring at a picture trying to come up with something to fit…after writing like a fiend to finish a short story by the deadline, I finally heard back from the publisher.

I saw the e-mail in my in-box.  The butterflies in my belly took flight.  I clicked.

Tears swelled in my eyes.  I couldn’t believe it.  The news wasn’t good.  It wasn’t good at all.  It was…

Yes!  I made it!  J. Taylor Publishing accepted my short story, “The Amulet of Ormisez”, for their Make Believe anthology!  Come December 2012, I can call myself a real, published author!

Oh, I’ve had things published before…newspaper articles, some shorts and poems in a college magazine a long time ago.  I even self-published some poems and a short story a couple of years ago, but this is the first time a real publisher has said “We want your story.”

I’ll post more when the shock wears off and I can wipe this silly grin from my face.  I’m shaking.  Someone pinch me, please. 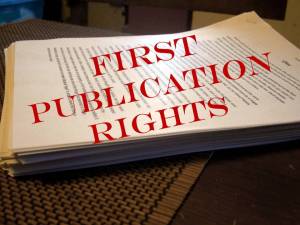 I told a friend the other day I’d submitted a short story to a publisher and was waiting to hear whether they were going to accept it for their anthology.  After giving me a firm lecture on why I should self-publish instead of waiting at the mercy of a publisher to make up their minds, he congratulated me and hmphed some more.  I asked him what the big deal was, why he was so against traditional publishing.

It’s exactly what it says it is.  If you are self-publishing, you have given yourself as publisher the first rights to publish your manuscript.  If you are going the traditional publishing route, you are giving the publisher first rights to print your story.  In the U.S., this is known as the First North American Serial Rights, and it is highly valued by publishers.  During the time the publisher holds rights to your manuscript (this will be in your contract), you are not allowed to sell it to any other publisher, magazine, movie house…nada.  At the end of that period, the copyright reverts back to the owner and you can do whatever you want with it.  While you can never get back first rights to that work again (obviously), you can sell Reprint Rights, Anthology Rights, etc.

Is is possible to give up your first right of publication and not realize it?

Yes, especially if you have posted your work in a public domain.

As someone who wishes to follow the traditional publishing path, keeping my first rights until I find the right publisher is important to me.  If you plan on self-publishing, then it probably won’t matter to you.  Just be aware of the buzz surrounding this issue and plan accordingly to your publishing taste.

Hi, everyone!  This post is part of the A-Z challenge. Please take time to visit the other blogs that are participating.

We all know the publishing world is turning upside down, and don’t let anyone convince you that the industry is dead.

The number is mind-boggling, and you know as well as I, those books aren’t coming out of the Big 6.  This means most of the influx (even if only half of are published) will come from self-published authors.   This saddens me to a certain degree.  Many years ago, it meant something to say you were a published author.  It was romantic.  You were looked upon with a certain respect.  You were special.  Unique.  After all, not everyone had a way with the written word.

Now, thanks to Lulu, CreateSpace and Amazon (among others), anyone can be published, whether they have talent or not.   There’s nothing special about being published anymore.   If you have a thousand bucks in your pocket and words thrown into a .pdf file, you can be published.  That’s not to say there aren’t some good self-published books out there.  There are, but the self-gratification process negates the romantic element of being published…the being picked.

There is something romantic about a publisher choosing a particular short story or novel for publication.  After all your time, hard work and persistence, someone notices and thinks you’re pretty darn special.  Your publishing ‘soul mate’ has picked you, YOU, out of the millions of hopefuls, to represent.  It’s romantic.  It’s exhilarating.  You won!  Your ‘voice’ spoke above all the others.

Where is the romance with self-publishing?  You plunk down your hard-earned money, gratify your needs, and then congratulate yourself for a job well done.  I will admit there are some lucky self-published authors who sell lots of books, but those are few and far between.

And what is with this eBook stuff?  I know it’s the wave of the future, but where’s the romance of pointing to something on a screen and saying, “I wrote that”?  Imagine giving birth to a baby and never being able to hold it, touch it.  All you can do is look at it on a screen and say “I created that.”  I know this is an extreme example, but there’s not much difference to me.  These are my words, my creations.  I want to touch them, see them.  I want to autograph a complete novel, not a cover page. To me, digital isn’t real.  It isn’t physical.  It’s not the actual work.  It’s cold. It’s cyber.  It’s not romantic.

I fear tangible proof of an author’s work will someday vanish completely, like so many other crafts.  Physical books will be found only in museums or private collections.  They’ll be rare, but you know what?  They’ll be real.  They’ll outlast the Kindles and Nooks, and you’ll never have to worry about out-dated software.  All you’ll ever need with a tangible book are your eyes and imagination.  And when you’re done, all you have to do is pass the books on for someone else to enjoy.  No worrying about copyright infringement or too many downloads  per ‘license’ or ‘share’ rights.

Yeah, the more I think about it, the more I think this old-fashioned, romantic girl is going to keep it ‘real’. I know there’s a publisher out there who’s going to think I’m special, and my writing will find a home.  All I have to do is hold out and wait.  Be patient.  The best is yet to come.

We all know the importance of branding.  Anyone trying to sell a product knows how important it is to get it right from the beginning.  Authors are no different.  We’ve written a piece (novel, novella, short story) that someone else believes in and wants to publish.  How are we going to brand it?

I’ve toyed with this topic for a while and decided to use my maiden name or some variation of it:  J. Keller Ford or Jenny Keller Ford. Lately, however, I’ve had other say they really like my married name, Jenny Michaud (‘me-sho’).  I don’t know.  How do I choose?

I know!  I’ll let you guys decide.  Which name do you like the best for an author name?  Please vote in the poll below and leave comments galore.

Virtual chocolates to everyone who votes!