I trust my ability to know what’s right for me without having to doubt who I am when I get things wrong. I realize that there’s always room for improvement and I commit to consistently trying to become a better person in all aspects of life. I’m not better than anybody… it’s just clear that I’m not the same as everybody…and I work within my purpose every day to make that clearer. Greatness is my choice for my life, therefore I make no excuses when I fall short; I only put forth more effort. I’m here for something bigger than me, and my only desire is to add value to everything that I can. Should I stumble, I will remember these words, I will remember who I am, and I will remember that my mission is more important than my mistakes. I will never quit. ~ anonymous

For the umpteenth time in the past 4 years, I was rejected for yet another job.  The reason: I’m over-qualified.  I don’t understand what that means but there it is.  I don’t know what we’re going to do as a family.  There is no money to pay the bills, just what little my hubby brings in on disability. There is no doubt my faith is being tested, my sanity is frayed, and my heart and soul are in pain.

This may be true, dear Wesley, but we all need something to make us feel worthwhile, to feel needed and special. And like it or not, we all need money to pay the bills so we don’t end up living on the streets, which is where my family is heading if I don’t land a job soon.

To keep myself from feeling like a complete and utter failure, I did a little reflecting and thought about things that would make me happy instead of sad.  When I left the hospital the other day from seeing my mother-in-law (who I love dearly and is suffering from dementia and C-Diff), hubby and I drove around looking for things to inspire me and my writing.  There just happens to be this awesome affluent neighborhood near the hospital so we took an hour tour.

Here are some places and things that lifted my spirits and set my dreams in motion. 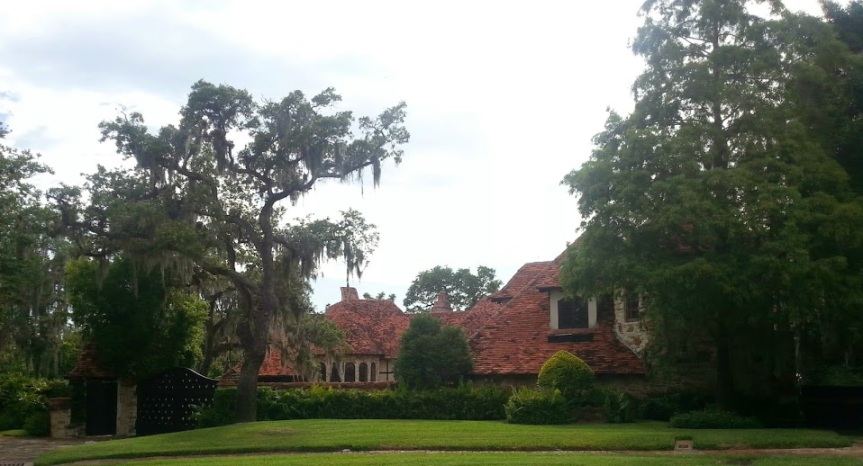 If I’m not mistaken, the above house was once owned (or is still owned) by Hulk Hogan.

Willadel Drive is a big horse shoe drive.  There are two of these gargoyles poised at both entrances to the drive.  So cool.

Down the road a ways was this sprawling mansion that looks directly out onto the bay. I’m standing in the narrow (not for sale) lot across the street and still couldn’t get the whole picture. 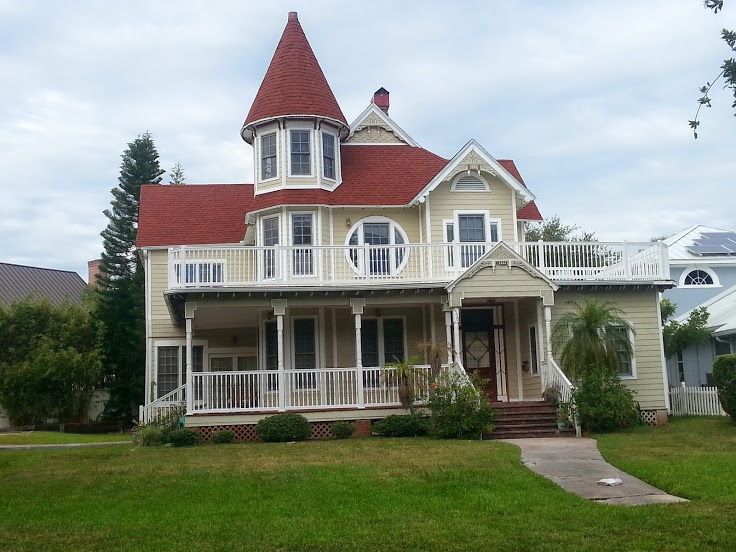 And check out this sweet Victorian home.  Love, love, love.

A mile or so down the road, I stumbled upon this beauty.  Look at that amazing staircase to the front door.  I think it was the reflection of the sky and the clouds in that amazing front door that inspired me the most when I took this shot.

We then took a ride out to the beachside.  I wanted to see how baseball’s Ryan Howard’s house was coming along.  We turned down a short cul-de-sac where we spotted this beauty.  It’s for sale.  I fell in love with the upstairs balcony.  I can imagine sitting there and looking out onto the Gulf of Mexico, watching the sunset.  *sigh* 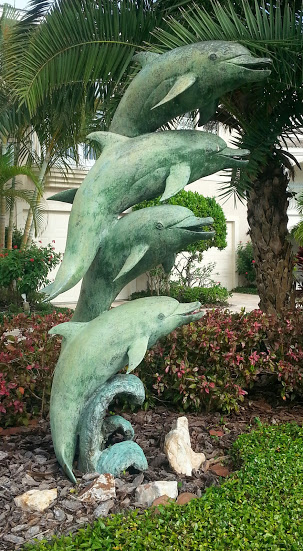 Not too far away were these happy dolphins smiling and leaping away in a front yard.  They made my heart happy.

And then, there was Ryan Howard’s monstrous creation: 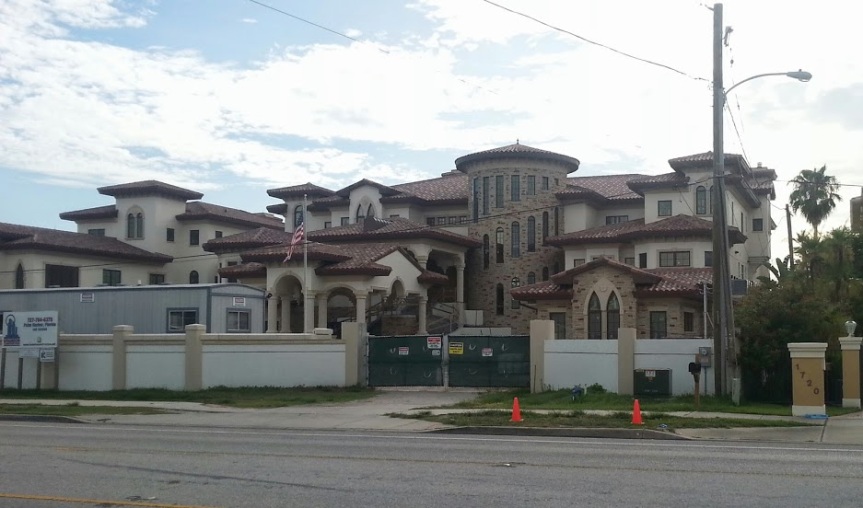 I posted about this home a year ago.  You can read it here.  I would LOVE to take a tour of this place when it’s completed. Breathtaking, huh?  And the Gulf of Mexico is just behind that house.

Someday, I will be able to care for and provide for those I love. Until then, I will do my best to brush off the rejections and take time to reflect on those things that are important while striving to reach my goal.  I will continue to seek inspiration and lend it when I can.  Life is too short to be sad.

What is your inspiration?  What do you do to keep constant rejection from getting to you?

I had the extreme pleasure of seeing the beautiful, amazing, and multi-talented Josh Groban perform last night in Tampa, Florida.

From the instant that strains of Straight to You resounded in the arena to the ending notes of Play Me, the evening was pure magic!!! Josh connects with the audience in a way I have never seen; bringing fans on stage, alternating between two stages, drawing the crowd into the music.  He pulled a 9-year old girl and a couple married for 46 years onto the stage and sang a duet of The Prayer with a girl from the audience.  While I’m sure the duet was arranged and ‘staged’, it was entertaining nonetheless.  He has a quirky sense of humor and interacted with the audience a lot.

Besides the large variety of beautiful vocals, he can also play a wicked set of drums.

But beyond all of the reasons people flocked to see him, there was something else about him that touched my soul:  his passion for what he does.  It came through in every note, from Galileo to Broken Vow, to Machine to Bells of New York City.  I realized as I listened to Josh sing and watched as he interacted with his fans, no matter how much training we have, no matter how much we say we want to be successful or need to be a certain way, without passion to drive us, all our wants mean nothing.  We can have all the talent in the world, but without passion, who will see it?

Josh’s show was unforgettable.  He sang his heart out and in doing so, fueled the already burning passion within me to write.  I may never be famous.  I may never make millions from my novels, but I will leave this earth one day knowing that pieces of my heart and soul are buried between every word of every story I write.  Other than my kids, I can’t think of a better legacy to leave behind.

What about you?  What are you passionate about and who inspires you to follow your dreams?

We often hear this word from writers.  “My muse ran away.”  “I’ve lost my muse.”  “I’d be lost without my muse.”  But what exactly is a muse (other than an awesome rock band)?

The word muse originated from Greek mythology.  Zeus and Mnemosyne had nine daughters called the Muses, and they were all of one heart, one mind, one spirit.  It was said then if the Muses loved a man, then the man’s worries would disappear.   I guess my muse doesn’t love me because I have enough worries to drown a horse.

While some artists attribute their spouses, children, lovers, etc. as being their muse, sometimes these influential critters aren’t always human beings.  Blame it on psychedelic drugs or vivid imagination, many artists perceive their muses as magical or make-believe beings.  For instance, Jim Morrison of The Doors said he called on the spirit world to inspire him and Stephen King said this about his muse:

“There is a muse but he is not going to come fluttering into writing room and scatter creative fairy-dust all over your typewriter or computer station. He lives in the ground. He is a basement guy. You have to descend to his level, and once you get down there you have to furnish an apartment for him to live in. You have to do all the grunt labor, in other words, while the muse sits and smokes cigars and admires his bowling trophies and pretend to ignore you… He may not be much to look at that muse-guy, and he may not be much of a conversationalist (what I get out of mine is mostly surly grunts, unless he is on duty), but he’s got the inspiration.”

Rick Bragg, author of All Over But the Shoutin’ says about the muse:

“… it is a glorious spirit. It is a flitting, unpredictable, fairylike creature that falls from heaven, glides twice around the magnolia, and touches lightly down, usually on the “writing porch.” It glows with a kind of elvish energy, and flings a golden glitter of fairy dust across the keys of their old Underwood—because only a Philistine would write on a machine that requires a power cord.

It darts like a hummingbird from ear to ear, whispering sentences of beauty, grace, and power; whole paragraphs that will transform barren pages into poetry, something prettier than real life. And they type as it talks, fast, faster, till the ends of their fingers are a blur, till drops of blood fly into the sticky air—because it’s the damn South—and land on the parchment, feeding the prose, till the whole page grows warm under their hands and they have to rip it out and fling it, smoking now, across the room.

They snatch another sheet and roll it in as fast as they can, but the muse—that hussy—has fled, and all they see is a speck of light, a glimmer of an idea, as it vanishes into the dark.”

Whether the muse is spiritual or flesh and blood, there is one thing they all have in common:  the world is indebted to them.  Otherwise, our lives would be void of almost all artistic impression.

As for me, my muse is a mischievous little imp always running around, showing my mind this, showing my mind that, but he also has an attitude much like Rafiki in The Lion King – always ready to beat me over the head if I don’t stay focused and remember who I am.

What about you?  What or who is your muse?