Recently, I had the opportunity to read the ARC of FIRSTS by Laurie Elizabeth Flynn.

Guys, I have to tell you, I had doubts about this one as it’s about this promiscuous girl in high school who wants to teach male virgins how to ‘do it right’ with their girlfriends for the first time.

I’m not one to read books about sex, and I’m certainly not one who wants to promote sex among high school students, but it was written by this lovely girl in my Sixteen to Read blog group: Laurie Elizabeth Flynn, and we are all reading each other’s ARCs, so I set my preferences aside and dug in.

Let me tell you. I started this early in the afternoon, like around 1:30, and I finished it by 5:30. I couldn’t put this book down. It was nothing like what I thought it would be. The characters are fresh, they’re well thought out, and I felt something for every single one of them. And let me tell you, the main character has some amazing friends, and we find out how awesome they are when the story takes its downward spiral.

I don’t want to give too much away on this one, but I will tell you, it totally deals with stereotypes and the way girls are judged for their sexual behavior. I wish there had been a bit more addressing of the double-standard and that guys should be held as responsible as girls for their sexual “mistakes”, but honestly, the story holds a very important lesson. I was overwhelmed by how much I really loved this book, and I highly recommend it.  I give it 4.5 stars out of 5.

Hello, everyone! Jenny was nice enough to let me hijack her website, and I’m absolutely thrilled to share the cover for FIRSTS with you. 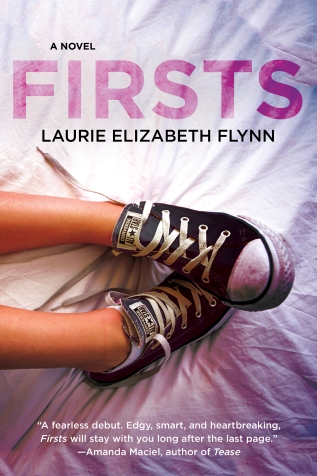 My first (pun intended) reaction when I saw the cover? I was floored. The insanely talented cover designer, Danielle Christopher, captured the essence of FIRSTS perfectly. It’s bold without being too provocative, edgy without being too suggestive. The color palette took my breath away. I was lucky enough to have the wonderful Amanda Maciel, an author whose work I greatly admire (TEASE is one of my all-time favorite young adult books), provide a blurb that makes my heart beat faster whenever I read it, and having her words on the cover is such an honor.

The first time I saw the cover turned into the second time. And third time. I whipped out my phone to check it while I was at work, oh, probably a hundred times. (I think I walked into a wall one of those times….)

FIRSTS is a story about a lot of things. It’s about sex and rumors and secrets and slut-shaming. It’s about mistakes and friendship and lust and love. There’s laughter and tears and heartbreak and at the very core, a girl who is slowly learning that the only way to find the control she craves is to stop looking for it. And in one image, I think this cover conveys all those things.

Seventeen-year-old Mercedes Ayres has an open-door policy when it comes to her bedroom, but only if the guy fulfills a specific criteria: he has to be a virgin. Mercedes lets the boys get their awkward fumbling first times over with, and all she asks in return is that they give their girlfriends the perfect first time- the kind Mercedes never had herself.

Keeping what goes on in her bedroom a secret has been easy- so far. Her mother isn’t home nearly enough to know about Mercedes’ extracurricular activities, and her uber-religious best friend, Angela, won’t even say the word “sex” until she gets married. But Mercedes doesn’t bank on Angela’s boyfriend finding out about her services and wanting a turn- or on Zach, who likes her for who she is instead of what she can do in bed.

When Mercedes’ perfect system falls apart, she has to find a way to salvage her own reputation and figure out where her heart really belongs in the process. Funny, smart, and true-to-life, FIRSTS is a one-of-a-kind young adult novel about growing up.

Laurie Elizabeth Flynn got hooked on writing in the fourth grade, when she repeatedly bugged her teacher for more paper to write her stories on. She later went to school for Journalism, where the most important thing she learned was that she would much rather write fiction than report the news.

Laurie also worked as a model, a job that took her overseas to Tokyo, Athens, and Paris and spurred her obsession with all things fashion. She now lives in London, Ontario, Canada with her husband Steve, who is very understanding when she would rather spend time with the people in her head. Laurie can mostly be found at her writing desk, with the world’s most spoiled Chihuahua on her lap. Laurie drinks way too much coffee, snorts when she laughs, and times herself when she does crossword puzzles. FIRSTS is her debut novel.