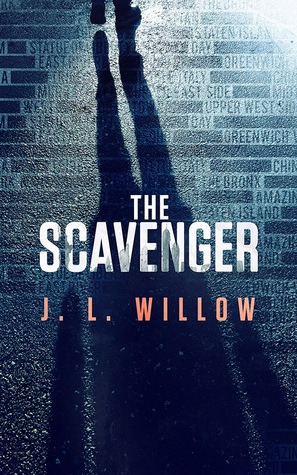 A few weeks ago I was approached by the author of this novel with a request to read and review her book, THE SCAVENGER. I read the blurb and it interested me a bit, but what hooked me was that she was a teen at the time she wrote the novel. Of course I had to read it. I mean, how could I not? She was a high school student with a love for reading and writing. I HAD to read it.

“IT’S NOT SECRETS THAT ARE DANGEROUS. IT’S WHAT SECRETS MAKE PEOPLE DO.”

When a number of teen drug overdoses disturbs the NYPD, an investigation is quickly formed to uncover the forces behind it. Four people with no previous connection soon find themselves the object of scrutiny as the case moves forward.

Catherine is a freshman living an unfulfilled high school life. After a gentle nudge from her best friend Eve, she begins searching for more. A boy named Samuel may be the answer to what she’s looking for, but not everything is what it seems.

Samuel has connections to the investigation in more ways than Catherine realizes and carries more secrets than he cares to admit. His decision to take a risky bet with a man named Frank seems like easy money but instead causes his life to quickly unravel.

Frank is a drug dealer living in New York City, best known for his heinously addictive strains of laced marijuana. With the NYPD closing in and pressure slowly building, he discovers the life he’s carefully built for himself in danger of collapse.

Nathan Tawallis of the NYPD is lead investigator of the case. Much as he tries to ignore it, long forgotten memories begin to surface and past connections to the drug network quickly become too hard to ignore.

With lives becoming inexorably entangled, The Scavenger weaves a tale of suspense and finding family in unsuspecting places while simultaneously delving into the dangers and alarming nature of the illegal drug trade.

I have mixed emotions about this book. Part of me loved certain aspects of it, but there were downsides as well that I can’t push out of the way.

The book is told from 4 points of view. This in itself doesn’t bother me as I think it’s a good way to get into the heads of the main characters to learn what drives them to do the things they do. Unfortunately, this didn’t happen with this novel. I thought Willow missed lots of opportunities to allow the reader to discover the backstories of each character. This kept me from knowing the characters, thus connecting with any of them on a personal level. I still learned enough to follow their thoughts and motivations, but I would have loved to have seen more character development.

The plot line is an interesting one. I admire the author tackling the drug issue that is prevalent in our schools. I found the dealer’s perspective interesting, but I would have liked to know more why he chose Catherine as his victim. What made her so vulnerable to him? Why did he need her out of all the students in the school? I also would have liked to have seen more of the driving force behind Nate’s (the detective) determination to capture the dealer, especially early on.

I did like the author’s style a lot. She has a wonderful way of stringing words together and there were moments when I said to myself, ‘why can’t I write like this?’  The teen voice was perfect. Willow captured the snark, the sassiness, everything about being a teen, including the drama. Again, I wish there had been more of it.

I felt the story moved waaaay too fast. Catherine and Samuel meet, they ‘fall’ in love, there is this whirlwind romance, then all this bad stuff happens all within a couple of weeks. I know things move fast in teen world … I do remember that … but not that fast. I would have liked to have seen things slow down, the situations developed a bit more. The quickness of everything took away from the severity of the plot. And the way it all ends was a bit abrupt and weird. I didn’t feel it truly believable.

Please don’t think the book is bad. It’s not. It’s actually pretty good, especially for a first attempt at writing a novel. Personally, I wouldn’t let anyone read the first novel I wrote so I give a lot of kudos to Willow for sharing this first work with us. There is confidence in the writing and I have no doubt her writing will only get better and better.

With all that said, I still think the story gets around 4 stars. I’m looking forward to her next novel – a stand-alone not related to The Scavenger. It’s currently in the genre of mystery with a touch of paranormal and she is hoping to have it out by the start of 2019. Stay tuned for more details.

L. Willow voraciously read everything she could get her hands on as a child and continues to this day. She was inspired by the way words on a page could capture the imagination, beginning her journey as a writer at just six years old. When she’s not holding a pencil or a book, she can be found belting her favorite musicals or studying to become a mechanical engineer. Days off are spent relaxing with her family in New Jersey.

You can connect with the author through one of the links below:

3 thoughts on “Review: THE SCAVENGER by J.L. Willow”