Hi everyone!! Welcome to the official Cover Reveal for

Celebrate this reveal by entering the giveaway found at the end of the post!

I’ve been really looking forward to this book so let’s get to it straight away!!

Victory is written in the blood of the brave.As the armies of the Tibran Empire continue to march across Maldobar, a path of scorched destruction and despair is left in their wake. Even with the formidable princess, Jenna Farrow, leading the charge, the strength of the dragonriders is waning. Tibran victory appears inevitable—especially after Princess Jenna and Prince Aubren are taken hostage by the infamous Lord Argonox. Separated from her brother and tortured for information, Princess Jenna refuses to bend to the iron will of Argonox. But her strength and resolve may only last so long. Held prisoner in his dark tower, it would take a miracle to set her free—or perhaps a pair of demigods and their dragons. With revived dragonrider legend, Jaevid Broadfeather, at his side, Reigh must now make a choice: face the truth about the origin of his dark powers, or turn his back on world in need. But throwing off a lifetime of shame and self-doubt is not so easily done—especially when the cost of failure means the destruction of the world. The long-awaited hero has awakened. The ancient spirits are stirring. The dark goddess has chosen her champion. But is he ready to embrace that rite and become the HARBINGER Maldobar needs him to be?

Nicole is the author of the children’s fantasy series, THE DRAGONRIDER CHRONICLES, about a young boy’s journey into manhood as he trains to become a dragonrider. She has completed the first two books in the series, and is now working on the third and final book. Other works include MAD MAGIC (Sept 2017), FAULBENDER (tbd), SCALES (tbd), and THE DISTANCE BETWEEN STARS (May 2017).

Originally from a small town in North Alabama, Nicole moves frequently due to her husband’s career as a pilot for the United States Air Force. She received a B.A. in English with a concentration in Classics from Auburn University, and will soon attend graduate school.

She has previously worked as a freelance and graphic artist for promotional companies, but has now embraced writing as a full-time occupation.

Nicole enjoys hiking, camping, shopping, cooking, and spending time with her family and friends. She also loves watching children’s movies and collecting books. She lives at home with her husband, two cats, and dog. 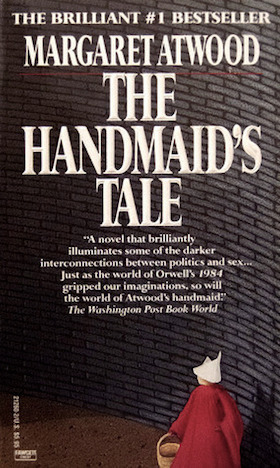 I tell you what, I had my reservations about Hulu doing an original series of Margaret Atwood’s novel, but they have done an outstanding job. If you haven’t read the book, I highly recommend it before watching the series.

What is the story about?

June, aka Offred, has been abducted and taken from her husband and child to become a handmaid in the Republic of Gilead, a totalitarian and theocratic state that has replaced the United States of America (there are still some small cells of Americans trying to take back the country). The lucky ones to not fall under the regime change have fled to Canada.

Due to dangerously low reproduction rates, handmaids are assigned to elite couples that cannot conceive. The handmaids are forced into copulation with the husbands while the wives watch and take part in the ‘act’. It’s actually quite difficult to watch. June/Offred serves Commander Waterford and his wife, Serena, a former gospel singer and an advocate for traditional values. However, her role has changed to one of subservience and she is as much a victim of this male-dominated totalitarian regime as June/Offred is. They are both prisoners, with Offred only allowed to leave the house while on shopping trips or with Serena, the room to her door cannot be completely shut, and the eyes of Gilead and its police force are everywhere, watching her every move. Serena is kept underfoot by her husband. He rarely touches her. They do not have a relationship of any kind other than one of appearance. She is in a loveless marriage and lives the life of an oppressed woman forced to placate her husband in this new world order that tends to put men on top and women beneath them. We get glimpses every now and then of the pain Serena feels since this is not the sort of relationship she and her husband once had.

The story takes us on June/Offred’s journey through her everyday life. I am not going to give anything more away as I really want you to read the book and/or watch the series, but I do want to tell you why I love this series so much. Of course, I would love to hear your comments so please leave them below.

1. The acting in this show is stellar. The cast really pulls you into the characters. They are the characters. I have rarely found a television series or a movie that is adapted from a book that really takes the ‘reader’ into the live version of the story and make it so real that it almost feels you are watching real-people’s lives on hidden camera. Sometimes you want to jump into the screen and go psycho on some people.

2.  I thought the book wore me out, but the series is so intense. It masterfully brings out the hurt, the anger, the bitterness, the heartache, the sadness, love and especially hate. What happens to these women because of mightier than thou men and their perverse belief in God really grinds my gears. Everything Margaret Atwood made me feel between the pages is forefront on the screen. It’s visual, and it’s just as horrible as my imagination. Kudos to the director, and screenwriters.

3. The sense that all women, no matter their station, can empathize with each other while trapped in their society expectations, is one thing I love about this show. While Serena is an “elite” woman, there are moments when you see her remember her life the way it was, the relationship she once had with her husband. There are moments you can see she understands June/Offred and wants to team up with her and fight with her against all the atrocities of this society. She almost wants to reach out to her, to embrace her, but because of her station and her brainwashing and the fact she’s married to one of the most disgusting men to ever live, she can’t give in to her heart. The latest episode has left me numb and scared for June/Offred and the child she carries. Will Serena come to her senses and see June/Offred for what she truly is … for what they both truly are … emotionally and physically abused women at the hands of the government and especially Commander Waterford?

4. Determination and strong will. June/Offred is the epitome of hope. She’s also a kick-butt heroine who is determined to set things right again regardless of all the horrors that have happened to her. She is determined to not remain a victim. She has gotten very good at playing ‘the game’, as many abused persons do, but she is always looking for a way out, for a way to right the wrongs. There are all sorts of hope symbols thrown out there: handmaids escaping and making it to Canada to gain their freedom. There are the people of Canada protesting Gilead. There is an underground movement for change. June/Offred has chosen to do what she can to make sure everyone is aware of what the American people have suffered at the hands of Gilead. I want to fight with her. I want her to succeed. I want her to make Commander Waterford regret the day he ever touched her. If anyone can do it, it’s June/Offred.

5. Love. Everything centers around love and more so, the lack of it. We see what a lack of love does to small babies. We see what happens when it’s vacant from marriages. We see the devastation when the world is forced to live without it. On the other hand, we see what a parent will do to fight for his/her child. We see the pain when loved ones die. We see the joy when lovers and friends are reunited. We see the power of love in the dark shadows of everyday life and the strength it gives us, even when forbidden. Can the world live without love? The rulers of Gilead think so, but the human spirit gives us something completely different, proving once and for all, love will conquer all.

While this book/series is dark and at times almost hopeless, there are rays of light that shine through. You see what the fight is all about and why it’s important to people as individuals and as a world. And while I know how the book ends, I am desperate to see if the series stays true to story of if they give their viewers something else. I will be watching and waiting, and praying for June and Serena especially. Love always finds a way to triumph over evil, right?  It just has to.