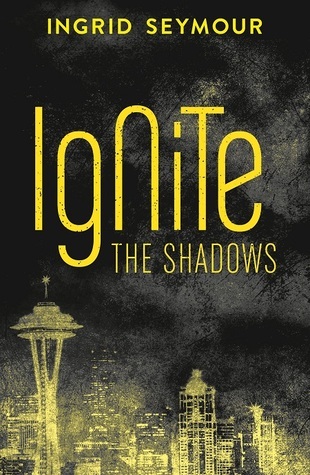 Sixteen-year-old Marci Guerrero is one of the best teen hackers in Seattle. However, she’d give up all her talents to know she isn’t crazy.

Marci feels possessed by what she perceives as shadowy specters that take control of her body and make her do crazy things. While spying on the clandestine group known as IgNiTe, she’s confronted by the leader, James McCray. His presence stirs the specters inside her brain into a maddening frenzy. Her symptoms and ability to control them don’t go unnoticed by James, who soon recruits her and shows her the awful truth.

Half of the world’s population is infected by sentient parasites. They bind themselves to the human brain and replace the pathways for all thoughts and actions. The creatures then morph their hosts into grotesque monsters with extraordinary strengths. Winged, clawed, fanged half-humans become living nightmares. Now Marci wishes she was crazy, because the truth is worse.

I received IGNITE THE SHADOWS from the author in exchange for an honest review.

You know, I have to say, my emotions were all over the place with this book. Parts of me loved it, as in really, really LOVED it. Another part of me started skimming in some places, as if saying, “Let’s get moving. Enough jibber-jabber. There was another part of me that found the creepy parts super creepy … and yet there were times I just didn’t “feel” the moments.

I enjoyed the premise of this book and found Marci to be this kick-butt heroine that teens will fall in love with. She’s complex and there is so much depth to her character.

Luke, Marci’s “love interest” for a lack of a better term, was an amazing addition to the story. However, there is a certain revelation about Luke that seemed to come on too soon, and I wasn’t totally on board with it, including the speed at which Marci adjusted. She’s such a snarky character that this whole scenario seemed unrealistic for her. I expected more combativeness. More spirited combativeness. More Marci.

There are a cast of characters that will keep your heart pounding throughout this sci-fi/fantasy/horror story. The ‘shadows’ are enough to keep your spine-tingling, and I really did enjoy the plotline. I’m not usually one to read stories of parasites infecting host bodies because they all seem to be the same sort of tale, but this one took the norm to a different level. I love the idea of a resistance force that has gathered to fight the enemy. I like the character traits of those who have gathered to fight it. Can 1% of those infected, win?

The story does end on an emotional plot point, leaving it open to the sequel, which I believe is already out. The writing is to the point. Marci’s character is quite blunt. She’s sarcastic. She’s tough. She’s a biker. It took me some time to warm up to her because she does come across as a bit cold and bitter. Steely, like her bike.

I enjoyed this story and will read the others in the series just to see what happens. While this book doesn’t top my list of “OMGosh, give me the next book!”, there is no doubt the author has a way of weaving a tale and her style of writing is unmistakable. I like that. A lot.