In September, 2014, Hypothetical Press, will release their first anthology, READING GLASSES – Stories Through an Unpredictable Lens.

Well-known author, blogger and member of the South Jersey Writer’s Group, Marie Gilbert, has already conducted some interviews with the authors that you can read here.

If you look really hard in that long list of authors, you’ll find moi.  Yep, my short story, THE PASSING OF MILLIE HUDSON, will appear in this anthology, and I couldn’t be happier. Aaaaannnd, since I’m jobless at the moment, and have nothing better to do with my time than write and do stuff related to writing, I made a simple freebie book trailer for Millie Hudson over at Animoto.  Here’s a looksie:

I originally posted this review on December 11, 2011 but for some reason, it is not displaying  – so, I’m reposting. 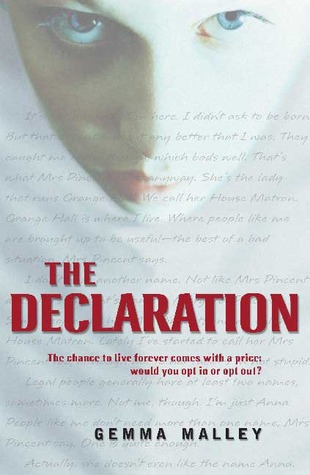 This is the question asked in Gemma Malley’s dystopian novel, The Declaration.

My son brought this novel home from school.  Apparently, this novel has been out since 2007 so I apologize if I’m a bit behind the times. Since I’m a huge dystopian fan, I thought I’d sit down and read it, see what my kid is reading.

In the Year 2148, it is illegal to be young. Children are all but extinct. The world is a better place. Longevity drugs are a fountain of youth. Sign the Declaration, agree not to have children, and you too can live forever. Refuse, and you will live as an outcast. For the children born outside the law, it only gets worse – Surplus status.

Not everyone thinks Longevity is a good thing, but you’d better be clear what side you’re on. Surplus Anna is about to find out what happens when you can’t decide whether you should cheat the law or cheat death.

There is much in this book that made me think.  It is implied that the earth’s resources are depleted.  Energy is regulated.  Old people are pitted against young, and in the end, it was decided the old have more rights to live.  But at what costs?  Children are considered evil marks upon the world.  Only one child is allowed per family.  Any others are to be killed or taken on as Surpluses.  Surpluses have no mind, opinion, thoughts.  They are beaten into subservience, ridiculed, belittled.

I found the plot to be well-structured and the concept engaging. I also think the author did a fair job at tackling serious issues about death, the natural progression of life, the role science plays in our future and our responsibilities to ourselves, our young and our old.

The novel started out well for me, throwing me into Anna Covey’s world where death is in the past.  Old people now have Longevity, and all children are an abomination. Drugs have been developed to stop the onset of ageing and there is no room left for children.

Anna is a Surplus, and according to the Authorities,  should never have been born at all. Like all Surpluses, Anna lives locked away in Grange Hall, where Surpluses are forced to make amends for their parents’ ‘sins’ for having conceived and given birth to them at all.  And they are punished severly.  Having known nothing else, Anna accepts her fate, and lives a life inside four walls, away from sunlight, laughter, and freedom.  Until the day Peter, a new surplus who’s lived on the Outside for sixteen years, arrives with news her parents love her, are desperate to find her and she’s not a Surplus after all. Does she trust Peter or does she trust what she’s been taught for fifteen years?

I think the author does a good job with tackling the issues facing our society these days:  a society where beauty and youth is everything.  A world where ailments can be remedied with some chemical cure, in spite of the three thousand side-effects these drugs carry.  A world that is being over-populated because the natural phases are life are not allowed to take place.  She also tackles to some respect society’s fear of teenagers and their culture. Where I think it falls short is in the writing. So much of it is a ‘tell’ story and not a ‘show’ story and I think it would have worked better if it were written completely in first person. As it is, parts are in first person, the rest in third.  I think this aspect of the author’s writing kept the characters from living and breathing on the pages.  Also, I felt some scenes could have unfolded better. The suspense factor was lacking. I felt there was a lot of melodrama going on by the end of the book and it wasn’t as chilling as I would have liked to have seen.

With that said, I still think fans of The Handmaid’s Tale would like this storyline. Over all, it is a good story and I would give it 3 ½ stars out of 5. I will definitely read the continuation, The Resistance, to see how the story ends.