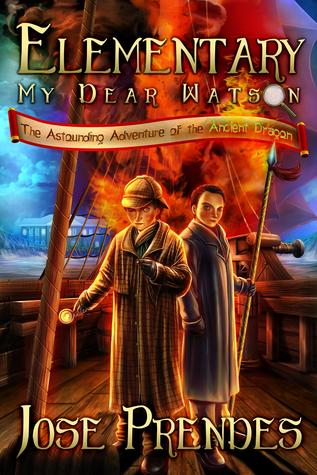 In the interests of disclosure, the publisher provided me with an ARC (Advanced Reader Copy) in exchange for an unbiased review.

When Curiosity Quills, the publisher of this middle grade novel, approached me and asked if I would like to read and review a copy, I enthusiastically said yes.  I’ve always enjoyed Sherlock Holmes mysteries and found the premise to this novel to be fun and interesting.  I was not let down. Let’s look at the back cover blurb so you can get an idea of the storyline.

When 12-year-old John Watson is sent to Candlewood boarding school, he makes quick friends with a boy named Sherlock Holmes, a universally disliked know-it-all and amateur sleuth. Before long, Sherlock embroils his new friend in a covert investigation of the mysterious disappearances blamed on a vengeful ghost. Dodging the meaty fists of the bully Moriarty, and aided by bumbling patrolman Lestrade, they uncover a deadly secret hidden deep underneath Candlewood. But does the duo have the brains–and the brawn–to crack this dangerous case?

One thing I really enjoyed about this tale was that it takes place when Sherlock Holmes and John Watson are twelve years old. The author, Jose Prendes, did an excellent job in capturing Sherlock Holmes’ voice, and Watson’s baffled admiration of his best friend.

The story is narrated by Watson, as always, and I really enjoyed his voice, though at times I did find it strayed from that of a twelve-year-old, sometimes sounding younger, sometimes older.  However, it was never enough to distract me or make me want to put the book down.

The story opens with enough action to keep the reader engaged.  Watson finds himself in the midst of a tragic state of family affairs that requires him to be sent away to Candlewood School for his own good.  The plot moves along at a steady clip throughout, peaking and falling off when it should.  I could picture the settings easily in my mind and the mystery itself, and Holmes’ strategy to figure it out was perfect for Middle Grade readers.  I found the introduction of Moriarty unusually interesting, but the cockney accents of Moriarty’s clod mates was difficult to read and took me slightly out of the story.  However, Holmes’ character quickly brought me back to the forefront and grounded me back to the plot.  I found myself laughing out loud at times.

There were a couple of things I had issues with.  Watson is sent to Candlewood School because of a very stressing family issue that has him quite torn up.  However, once he arrives at the school and meets Holmes, he tends to forget the troubles back home a bit too easily for me.  There isn’t enough angst or worry or feelings of not fitting in on Watson’s part.  I would have liked to have seen a bit more emotional development with him.  There were also times that Watson appeared to be completely clueless when he should have been able to understand a simple matter.  I think the author made him a little too dweebish at times in order to make Holmes look smarter than he really was.  Watson seems like a bungling clod much of the time.  I would have liked to have seen him a bit more confident. In all fairness, however, there was enough growth in Watson’s character to satisfy me and pleased that I took the journey with him.

There was a lot of action that would entertain most middle grade boys.  In addition, the story was filled with sarcasm, humor, mystery and adventure, hidden stairwells, blossoming romance and feelings of friendship and camaraderie.  The story wraps up nicely after a blazing ending that will have MG readers on the edge of their seats.  Overall, Elementary, My Dear Watson:  The Astounding Adventure of the Ancient Dragon was a pleasant read and I would definitely pick up the next book in the series.

I give this book 4 out of 5 stars for its fun, enjoyable, and quick read.  Thank you Curiosity Quills for providing me with a copy of this novel for reading.

8 thoughts on “Elementary, My Dear Watson! The Astounding Adventure of the Ancient Dragon”