Tomorrow, ONE MORE DAY will release to the public and a major blog hop will begin.  I thought I’d kick it off a day early by answering a question I asked of all the authors:  If there was one moment in your life you would like to freeze for ever, what would it be?

Outside of my weddings and the births of my four children, I would have to say the moment I would freeze forever in time is the day Kevin Richardson of The Backstreet Boys hugged me and gave me a kiss on the neck.

I know, it sounds dorky but hear me out.  It all started in September 1999.  The Backstreet Boys were hot on the scene and they were starting a new tour on December 1 of the same year.  Their opening venue:  Orlando, Florida.  December 2, they were going to be in Tampa, Florida.  Guess who stood in line with my daughters and nieces for several hours to get tickets?  Um hum, that would be me.  But tickets to the Tampa show weren’t good enough.  I wanted those elusive backstage passes.  All I could think of was how excited the girls would  be if they could meet the guys (not to mention I’d get the coolest Mom and Aunt points EVER).  So, I set to work, e-mailing and sending letters to publicists, record agencies, anyone who may have a connection to handing out backstage passes.  After several weeks with no response, I decided to do something that stood out from the crowd.  With a little help, I composed a crazy letter to the management team.  It had something to do with a “…teenage girl’s whine being the single entity that could, within the space of 30 seconds, simultaneously crumble the walls at Ft. Knox and send the entire population of Blue Whales into mass migration out of Monterey Bay. It can cut through steel, stop a heart and actually curl teeth.”

Three weeks later I get an e-mail from the management team.  They weren’t doing backstage passes but would I be interested in attending a fan conference in Orlando on December 1?  Would I be interested?  Were they kidding?  An hour later, I had a confirmation e-mail that we were in.  All I needed to do was bring the e-mail in case there were any snafus.  May I say it’s fun saying “I’m on the list.”

December 1 arrives and we make the 90 minute trek to Orlando.  It’s cold as hell.  Overcast.  We had to sit outside for the longest time, but finally go in.  The chairs were set up in a section of the walkway of the arena with a table in the front and multiple rows of chairs, enough to seat about 100 to 150 people.  The seven of us took over the 4th and 5th rows, took off our coats and prepared to be dazzled.

Finally, the boys came out amidst flashes of lights and screams and stood there for a moment looking all sexy and cool. 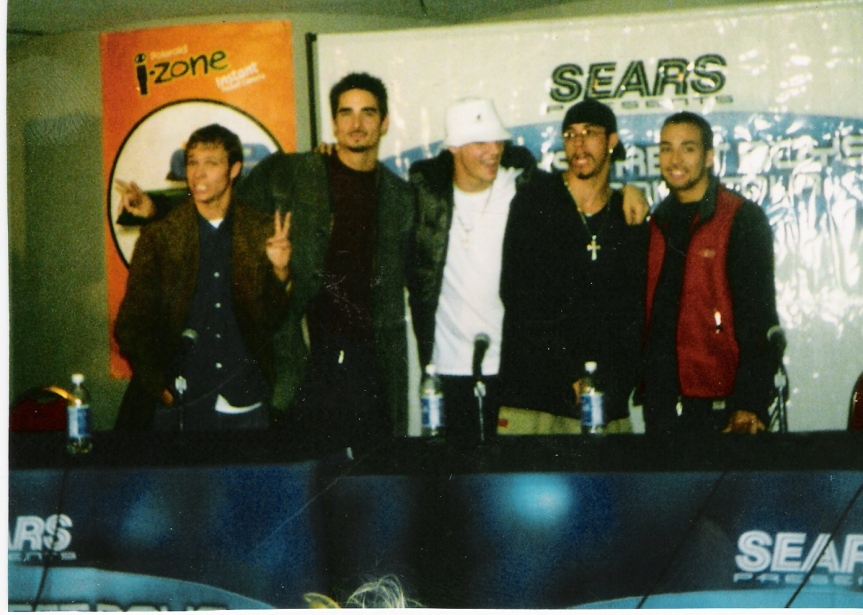 For those of you not familiar with the guys, from left to right we have:  Brian, Kevin, Nick, AJ and Howie.

The fan conference commenced, which was pretty cool.  There was a  microphone set up in the aisle about 4 feet away from me and anyone who had a question for the guys stood at the microphone and asked.  My eldest daughter decided she was going to get up and ask a question, which was all fun and dandy, until she said she wanted to pay me back for all the times I embarrassed her.  My stomach fell to the floor but I held my cool.  God only knew what she was going to say.  Of course the guys were rubbing their hands together with big grins on their faces.  You could tell they loved “getting back at  mom” time.  I could not believe the words that came out of my daughter’s mouth, something along the lines of, “Kevin, my mom is totally in love with you and I’d really like it if you would say hi to her.”

He smiled and asked her who her mom was.  She pointed to me and Kevin and I made brief eye contact at which time he said, “Hi.”  Yeah, okay, I admit.  I melted into a puddle of goo, but I remained composed.  I smiled and waved.  It was at that time I bent over to get a sip of my drink when I heard all these girls screaming.  Flashes from cameras were going off.  I look behind me to see what all the racket’s about and see that everyone is looking up front.  I turn to look at the guys and damn it if Kevin hasn’t left the table and is walking toward me.  In fact, he’s at the damn microphone and is sidling his way into my row.  Teenager butterflies fluttered in my belly.  I stood and we hugged each other for what seemed like forever.  If my foot had room to pop, it would have.  For I don’t know how long, time literally froze. There was no one else in that room.  No screams, no flashes of light.  Just me and Kevin in this innocent but wonderful embrace that I will never forget for as long as I live.  I have proof. 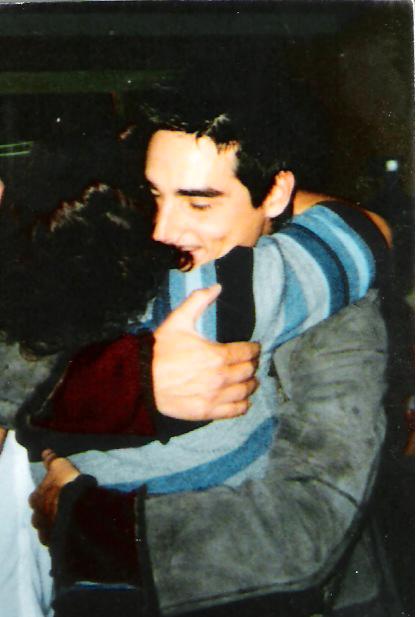 I know you can’t see my face but I promise you, it’s me.  I have witnesses.  Here I was, a 39-year old mom of four in a sea of screaming teenagers and young adult women, and I’m the one he wraps his arms around in a big bear hug.  Talk about a major ego boost.  To this day I remember that hug, the cologne he wore, the feel of that jacket.  His lips lightly brushing my neck…twice.  I guess you could say in a way, he imprinted on me.

The rest of the fan conference went along smoothly until my niece got up and made a comment that if it wasn’t for Aunt Jenny, she wouldn’t be there.  So Kevin, of course, started making comments every now and then to me, calling me Aunt Jenny.  It was such a strange and bizarre day.

After the guys left, news people were all over me. Cameras from the local news station were in my face with their bright lights on.  Everyone wanted to know what it felt like to be hugged by Kevin  Richardson.  Reporters from magazines in other countries were there wanting to interview me and my daughter, simply because of that one moment that time stopped.

I didn’t think about it until I wrote this blog but Kevin’s amazing hug happened exactly 14 years ago today, and the memory is as strong now as it was then.  I know the hug meant nothing to him, but it meant the world to me and I will never forget it.  And now that moment is frozen here in time with you, in this blog.  What a beautiful thing.

Great thing is, they’re still at it and sound fantastic.  Enjoy.  From their latest cd, IN A WORLD LIKE THIS.