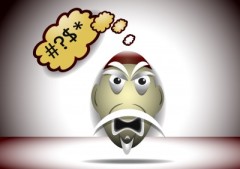 We’ve all been there.  We think we’ve made new friends at work or school, the world is looking all peaches and cream, then BAM!  Drama.  Now your BFF is your WNE (worst nightmare ever), and the tension is so thick around you, not even a well-sharpened, double-edged sword can slice through it.  I know.  I fell victim to it yesterday.

I made ‘friends’ with a girl and a guy at work that both started the same day I did.  The girl worked in the same section as me and we hit it off well enough.  Thing is, the girl had issues with two other gals in our section.  Personalities clashed, tempers rose, and the next thing I knew, there was feudin’ going on and lots of it.  I tried not to get involved in the rumble, but when you’re that close to the fire, you’re going to get burned.  In the course of a few minutes yesterday, I went from ‘friend’ to public enemy #3.  I am now shunned by my new-found ‘friends’, and the sad thing is, I don’t even know why.  When I asked why, I got the cold shoulder, as if I was the problem.  I know I shouldn’t let it bother me, but it does.  Why?  Because I did nothing to deserve this treatment.

If you ask me, the whole scenario is rather childish.  We’re adults, not children, and yet the gossip and back-stabbing goes on.  As always, the innocent are the ones who get hurt the most.

So, how do we avoid workplace and school drama without becoming an island?

1.  Divulge your personal problems and desires only to family members and closest friends.  Although you want to talk about your issues when people ask, it’s best to politely smile and say thanks but no thanks to avoid becoming fodder for the gossip mill.

2.   Resolve the conflicts immediately with all parties involved.  Don’t wait until the wound festers and becomes infected.  Be open, honest and respectful.  People can’t change if they don’t know there is a problem and what it is.

3.  Improve your sense of humor. Stay positive and laugh at situations.  Your ability to rise above the rude comments will help you rise above the potential drama.

4. Stop gossiping with others.  If you hate the drama so much, stop perpetuating it by going off with your friends and talking behind the backs of those that hurt you. That makes you no different from them.  Think positive thoughts and distance yourself from the negative.

5.  Stop hanging around with those who perpetuate drama.   You know the ones. They look for trouble.  Avoid them like the plague.  You don’t need those kinds of friends, no matter how nice they are.

6.  Don’t become a drama queen.  If someone confides in you, keep it confidential.  If you don’t, it will turn around and bite you in the butt.

7.  Take a leadership role and set an example.  People will follow your example.  If they don’t, you don’t need them.

8.  Spend time doing something more constructive. The less people involved in the drama the better, and it will eventually fizzle out when the conversation ceases.

9.  Avoid sabotaging each other for personal gain. It’s not worth it and someone always loses in the end.

10.  Be genuinely nice to everyone, no matter how they treat you.  You only lower yourself to their level when you get snappy and mean.