For the last two weeks I’ve been in Ft. Myers/Cape Coral/Sanibel, Florida helping a friend move from her condo back to her house she used to live in.  Until the house is completely ready to move in (there are other renovations going on), she is living in a cottage on the beach in Sanibel, FL.  Here’s a picture of the place.

Here is the one I spent the last two days of my trip: 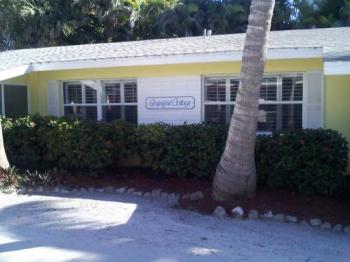 The good part of the trip was I got to spend time with my best friend of 30 years.  Our kids grew up together and now their kids are growing up as friends.  I think that’s pretty cool.  I also got to meet fellow author and blogger buddy, Jamie Ayres:

I also got to meet amazing YA authors (see my post from January 30), and picked up a few books.

During my stay, my friend treated me to some of the best dining in the Ft. Myers/Sanibel area like Doc Ford‘s (a frequent hang-out of author, Randy Wayne White),  RonDao’s, Nick and Stellas’s, Osaka Japanese Steakhouse (website not available), Sanibel Steakhouse, and Timber’s Restaurant.  I also got to see Spamalot a the Herb Strauss Theater on Sanibel, and it was FANTASTIC!  The cast and music were brilliant.  Amazing talent in this little, quaint theater group.  I was definitely impressed.

But, as with everything, the trip was not without its bad side.  My friend kept changing her mind a lot, changing schedules, putting off things that should have been done when originally planned.  (I’ll explain this in the “ugly” part of the post).  We argued on several occasions (again, explained in the ugly).  I got lightly sunburned on the beach looking for shells (should have worn more sunscreen).  My friend’s 14-year old Jack Russell, became very ill. She ended up crossing the Rainbow Bridge on Feb. 4, the day after I returned home.  I cried a lot during those 2 weeks.  I wanted to go home.  Why?

My friend is an alcoholic, and that’s the ugly truth.  She’s been in rehab after rehab and she relapses every time.  Out of the two weeks I was there, she was sober one night.  One.  She left me a few nights by myself so she could go drinking.  After Spamalot, we were supposed to get a bit to eat, but she dropped me off at the cottage so she could go drinking.  She kept mixing up the schedules for when things needed to be done because she was hung over or because she didn’t feel like dealing with them.  The last night we went to dinner with a friend of hers who also drank.  They got into an argument over oyster crackers and started banging the table and grabbing each other’s wrists and ‘fighting’ in the booth.  I actually left the table at one point, went outside and called my husband for like the 50th time since I’d been away, and I did cry.  My friend, who has this incredibly sweet, loving side and big heart, was drunk and unreasonable, and I was embarrassed to be with her.  That’s a horrible thing to say about someone you love like a sister.  When we returned home that night, she left me alone to entertain her guest.  She was rude and unthinking.  She put all responsibility on me to take care of her dog, to move, to paint, to vacuum, to mop.  It was not pretty.  Even after telling her how I felt and how rude she was and how these choices were destroying her, she still continued to fall into the pattern that alcoholics fall into.  It was more than I could handle.  Despite all the good food and the help my friend has given me financially over the last two years I’ve been out of a job, I found it difficult to be with her, to sympathize.  Her drinking made me angry.  I didn’t like the person I became being with her.

During my trip we were making plans to go to NY in May or June, but I’ve decided I can’t go, not unless she’s sober.  She also wants me and my family to come down during Spring break so the boys can do some fishing.  Maybe charter or rent a boat.  However, I cannot emotionally go through what I went through the last 2 weeks if she continues to drink.  I plan to explain all this to her once she recovers from her pup’s death.  I feel for everyone who has to deal with an alcoholic or an addict on a daily basis.  God bless you for not losing your sanity.

I went to an AA/NA meeting yesterday for friends and family members of alcoholics and drug addicts to see if I could find some answers as to how to help my friend and how to deal with what I went through for 2 weeks.  I don’t want to lose my friend to this affliction.  I don’t even want to call it a disease.  I saw her make the conscious choice to either stay sober and be with me and have fun, or leave me behind to go drink. She chose drinking.  So, so sad.  Our rare time together could have really been wonderful.

23 thoughts on “The Good, The Bad and the Ugly”